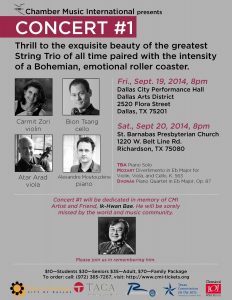 CMI will kick off their 2014-2015 series with a two day back-to-back concert on Friday and Saturday, September 19th and 20th at the Dallas City Performance Hall and St. Barnabas Presbyterian Church in –Richardson, respectively.

Four talented musicians unite on the stages of North Texas to showcase their version of Mozart and Dvorák. The 29th season starts off with a gentle piano solo performed by Russian Pianist, Alexandre Moutouzkine, a Dallas favorite. He is most notated for his Jury Discretionary Award at the 11th Van Cliburn International Piano Competition in 2001. The next piece features the Mozart’s greatest String Trio of all time. The Divertimento in Eb Major for Violin, Viola, and Cello will feature Israeli Violinist Carmit Zori, Israeli Violist Atar Arad, and Taiwanese-American Cellist Bion Tsang.

CMI is dedicating Concert #1 in memory of CMI Artist and friend, Ik-Hwan Bae. Korean Violinist, Ik-Hwan Bae, received second prize at the Queen Elisabeth Music Competition in Brussels in 1985. His pedagogical skills have led him to teach at prominent institutions such as Peabody Institute and Manhattan School of Music. He has been on the faculty of Indiana University’s Jacobs School of Music from August 1999 until his death on July 24, 2014. "Ik-Hwan Bae was a dear friend, the ideal chamber music colleague, and a spectacular human being. He loved music, people, animals in need; and he was gourmet chef. He will be sorely-missed by the world/music community." – Philip Lewis, CMI Artistic Director and Founder.

$70/Family Package – Up to 6 people per family and children must be 18 and under.

Will Call table opens an hour before the concert begins. Doors open at 7:30pm.